Metal drummers have some of the fastest feet in the business, so it’s no surprise that they choose their bass drum pedals and beaters carefully. In this gear guide, we’ll hear from a few Low Boy metal artists on which beaters they use and why. 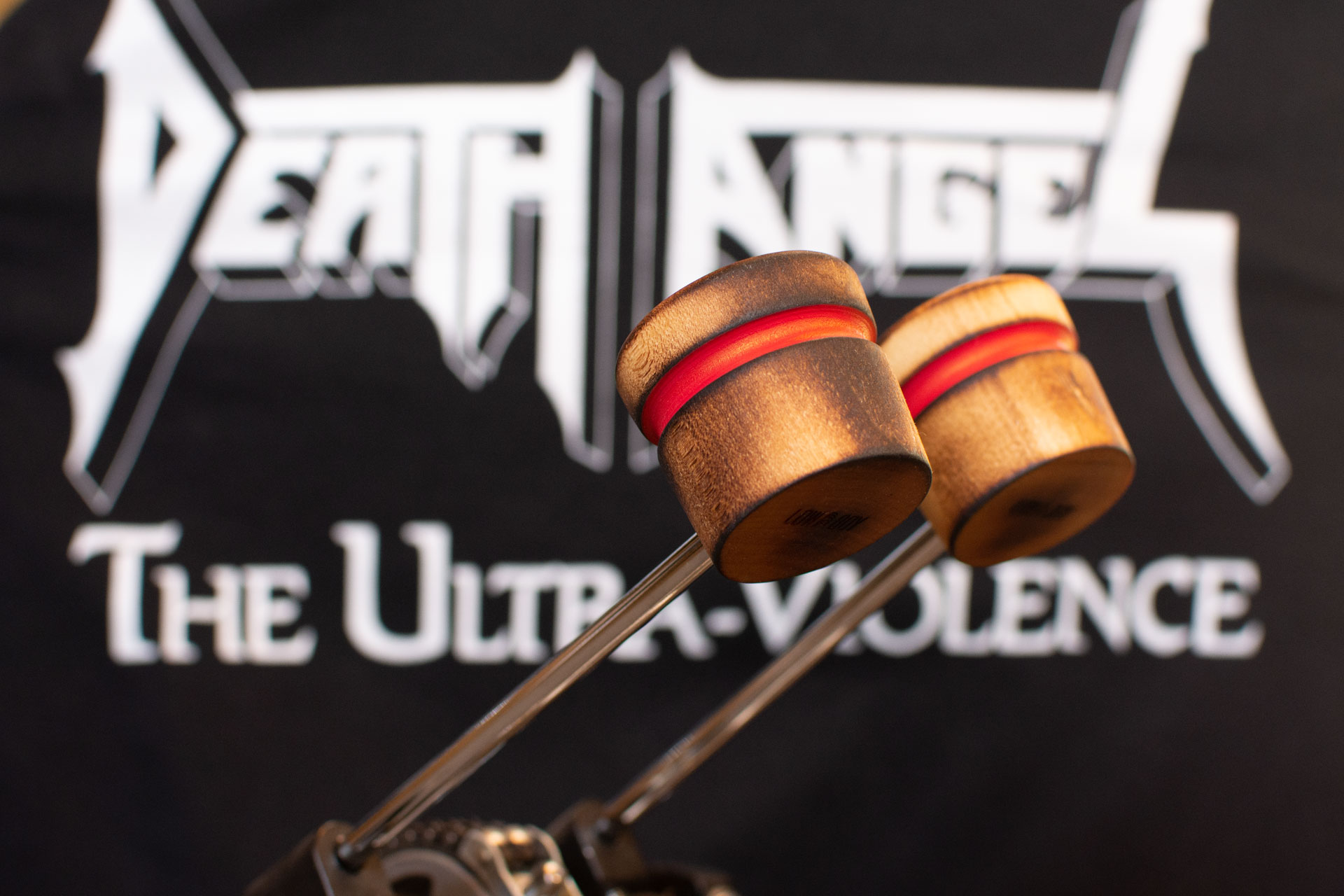 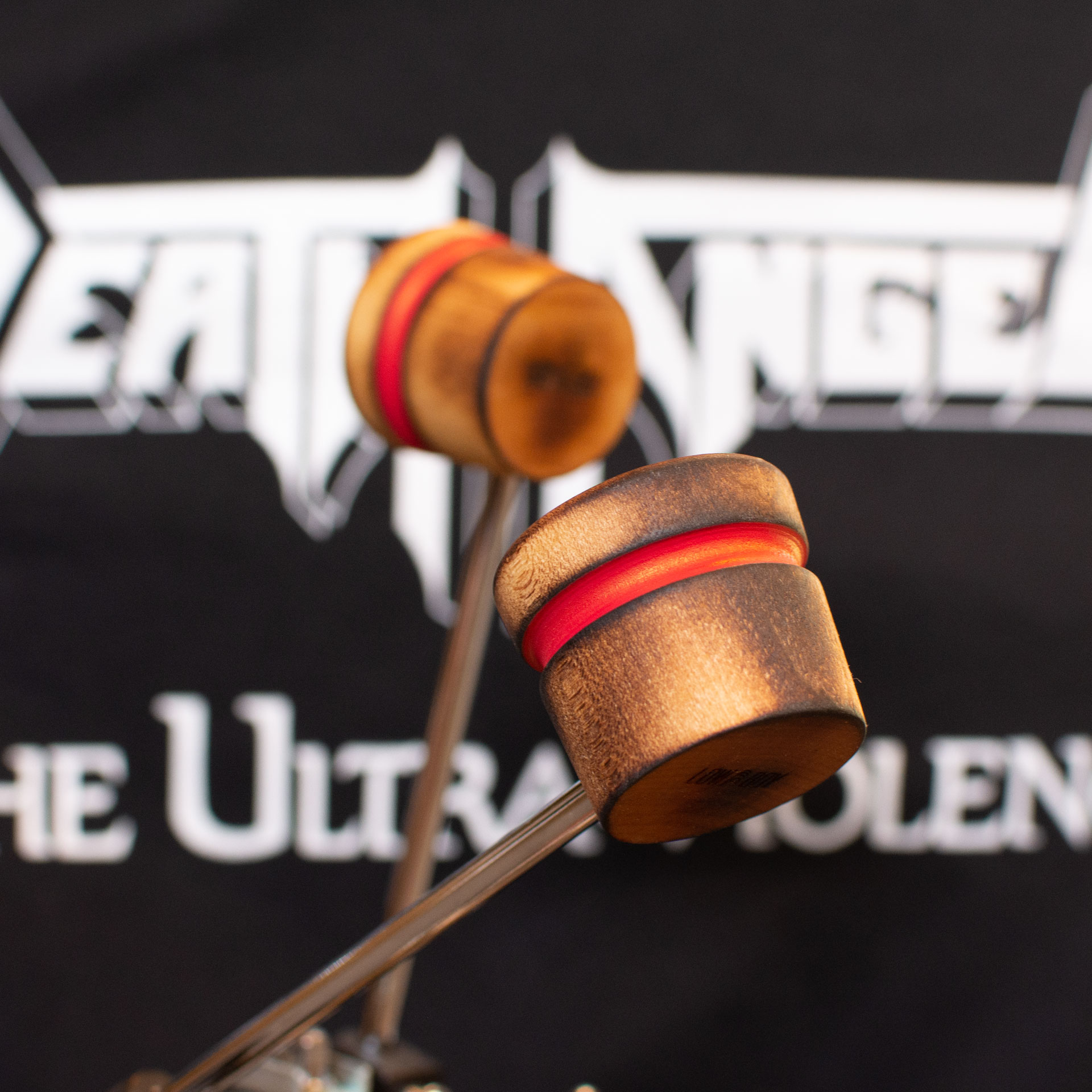 Metal drummers have some of the fastest feet in the business, so it’s no surprise that they choose their bass drum pedals and beaters carefully.

Many opt for extended footboards (longboards), direct drive systems and lightweight beaters that create the strongest and quickest connection between their foot and the drum. Their biggest need: speed! Whether they’re playing thrash, metalcore, death metal or one of many other subgenres, rapid-fire double-pedal grooves play a huge role in creating the right sound. There are many different elements that contribute to the speed, precision and control needed for high-level metal drumming. The amount of attack, striking surface area, weight and shape of the beaters all play an important role in creating the overall kick drum tone.

In this gear guide, we’ll hear from a few Low Boy metal artists on which beaters they use and why. Since they all play different styles of metal, each uses a slightly different setup to achieve the sound they’re looking for. Besides being accomplished technical masters, these drummers are meticulous and thoughtful about their gear choices. 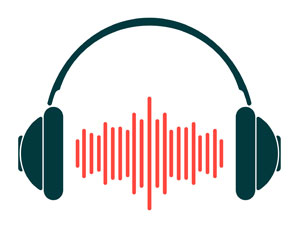 What’s the difference between wood and leather bass drum beater striking surfaces for metal drumming? Strap on some headphones and take a listen.

Low Boy artist Will Carroll has held down the drum chair for iconic Bay-Area thrash metal band Death Angel since 2009. The band recently received their first Grammy nomination after 38(!) years in the business, and Carroll’s energy and creativity make up a huge part of their sound. While many metal drummers prefer a wooden striking surface to get the most attack, Carroll uses a pair of Lightweight Leather Daddy Beaters on his Polish-made Czarcie Kopyto double-pedal.

He explains, “Death Angel is a traditional thrash band, so I don’t want the kick to sound overly ‘clicky.’ I want a more traditional warm sound. I went through a phase when I was younger where I was into plastic beaters and I’ve also used wooden beaters and plastic click pads. I was into that stuff for about a year and then I got out of it. I love death metal and early ‘90s stuff, but every album has the exact same bass drum sound. It’s like these crazy, clicky typewriters and I got burned out on that sound really quickly. The first band in the death metal world that dropped that sound was Morbid Angel. They were getting a more human, natural sound and it didn’t lose anything. The bass drum sound was so perfect. That’s why I like the leather.”

Carroll also zeroes in on the flat striking surface of the Lightweight Low Boy beater as a big contributor to his sound.

“I totally notice a difference in the way the beater connects to the head. It’s hitting the head perfectly flat and getting the maximum punch out of each stroke. When I first put it on there, I could also tell that it was doing its job and hitting right in the center of the bass drum head. Once I tried these beaters, it was a total improvement.”

Low Boy artist Billy Rymer agrees, adding “I think the design is very smart because the surface area allows a great deal of attack without a lot of force.” Rymer enjoyed a long run of success with legendary metalcore band Dillinger Escape Plan and currently tours with bands like thoughtcrimes, Ho99o9 (pronounced “Horror”) and END. He uses a pair of Lightweight wood beaters on his Tama Iron Cobra Rolling Glide Twin pedal. He compares the flat striking surface favorably with round beaters.

“I feel like with round beaters, you have to hit harder to get the same attack. The surface area of the Low Boy feels appropriate to getting desired attack from the drumhead as well as the right velocity. It doesn’t dent your drumhead the way a round beater does, and it’s also helpful for playing off the rebound. The rebound is nice, and that allows for faster notes at a higher velocity.”

Rymer also credits his switch to Low Boy beaters with helping him get over an injury that cropped up near the end of his run with Dillinger Escape Plan in 2017.

“I think it happened in the last studio session with Dillinger where I went too hard on the pedal and basically developed a compression in my lumbar area causing sciatic pain, which resulted in near-paralysis of my right leg. Later, I was on tour in Philly and went to try out some boutique kits at Philadelphia Drum & Percussion. I saw the Low Boys and said ‘let me buy a couple of these beaters, they look cool.’ So I threw them on my pedal and they made it better right away. I got more torque out of the rolling glide and I was able to get a snappier attack with less effort, which was great for me at the time considering I did not have a lot of strength in my right foot. And now I’m pretty much 90 percent healed and using the Low Boy beaters is something I’m used to. It just feels natural to have them on there. It feels like my pedals have the natural feel of a drum stick. It’s like the path of least resistance.”

Besides the striking surface, Rymer also prefers the 80-gram weight of the Lightweight models for all of his projects.

“I’ve tried heavier beaters and they’re something I would use if I didn’t have to play metal blast-beats all the time. To get the speed, attack and volume that I do, these beaters make it effortless. I’m able to play with longevity onstage and also play high-velocity for a longer time without straining myself. They’re the only beaters I want to use for my pedal. I’ve used them with Dillinger, END, thoughtcrimes and Ho99o9.”

Carroll agrees, saying his Czarcie Kopyto pedal “was designed for extremely fast drumming but the original beaters were pretty heavy. “Jason Bittner [Overkill] saw my setup in 2018 and suggested a few changes to make it work better. He said I was working too hard and suggested moving the beaters a little closer to the head and putting on some lighter ones.”

However, some metal drummers prefer the extra weight and aerodynamic shape of the 95-gram Standard models. Austin Archey from the popular deathcore band Lorna Shore uses a pair of Standard wood beaters on his AXIS AL-2 Longboard double-pedal.

“My pedals are already light, so I need a heavier beater to get the momentum when I’m playing faster. It helps me get a harder hit out of a light pedal.” Archey also uses Roland RT-30 drum triggers to help create the insanely fast double-kick patterns that embody Lorna Shore’s sound. He feels that the triggers respond best with a heavier beater.

“For the band I’m in, I need to find the right tools and instruments to make that 45 minutes of incessant blast beats come to fruition. The Low Boys bring a comfort to my playing. They have great rebound and response. When I first tried the different models, we tracked it and compared how hard each one hit in the recording software by actually looking at the wave form. It felt so smooth playing faster stuff. I felt like I was more in control of the pedal. I keep my beaters pretty far back so I get that nice action. The moment I put them on I thought, ‘this is good.’ I also just like to support cool companies.”

On the topic of the flat striking surface, Archey thinks “maybe it’s even a little subconscious, but making contact with the flat head really makes the most sense if you’re trying to get a full overall hit. When the beater is rounded you’re missing that real smack. The Low Boys are good for the audience out front and the feeling behind the kit. You dial it right in.”

Carroll says “20 or 30 years ago, I never even considered beaters. It didn’t factor in to the whole equation. Ever since I got Low Boy beaters, I feel much more in control.”

Rymer adds, “I think it’s a useful device to get more out of a pedal that you already own. It almost feels like you’re playing Moeller method with your feet. It has that snappiness.”

Archey concludes, “I wouldn’t want to use anything else. I don’t want round beaters or tiny beaters. I tell people all the time, just buy a pair and you’re gonna love ‘em. It’s something so simple but it has a big effect on your power behind the kit when you play live. They turned my pedals into a harder-hitting instrument. Plus, drummers love customization.”

For the best experience, please listen to these bass drum beater audio samples while wearing headphones. All sounds were played and recorded by Alex Cohen. 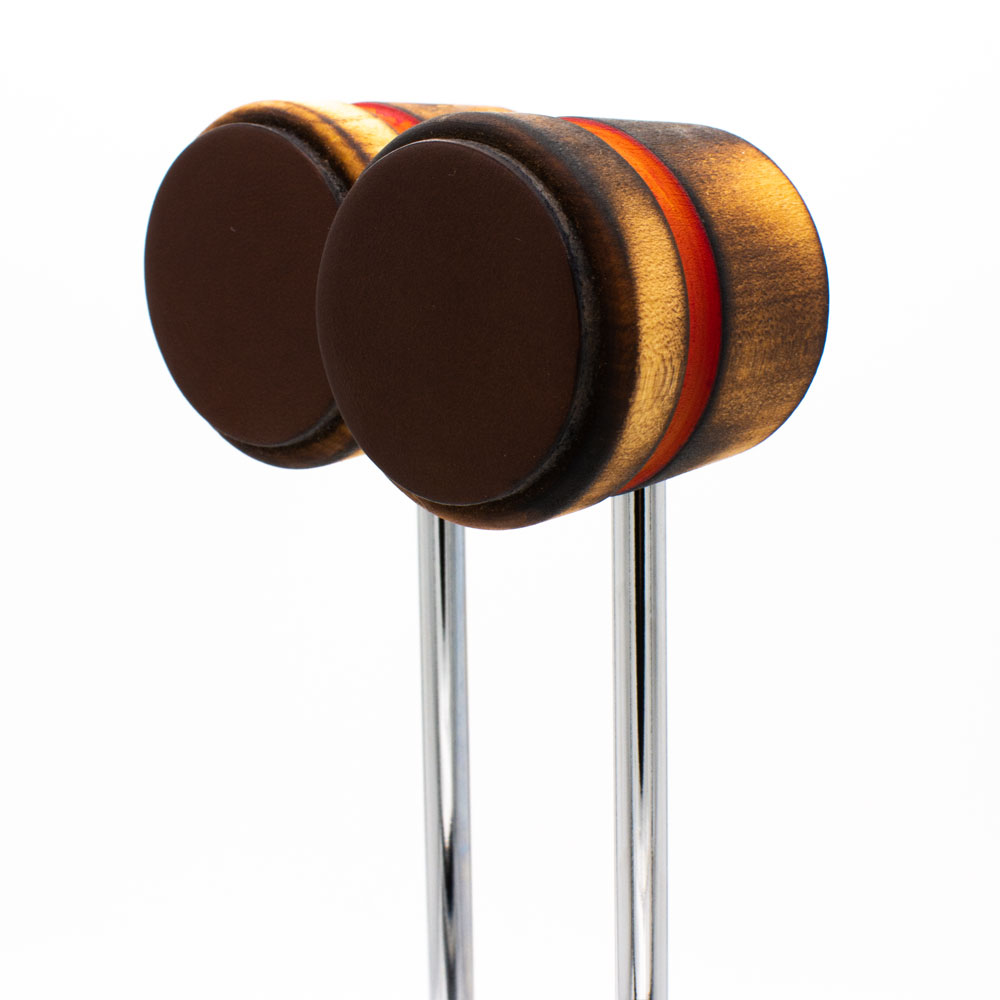 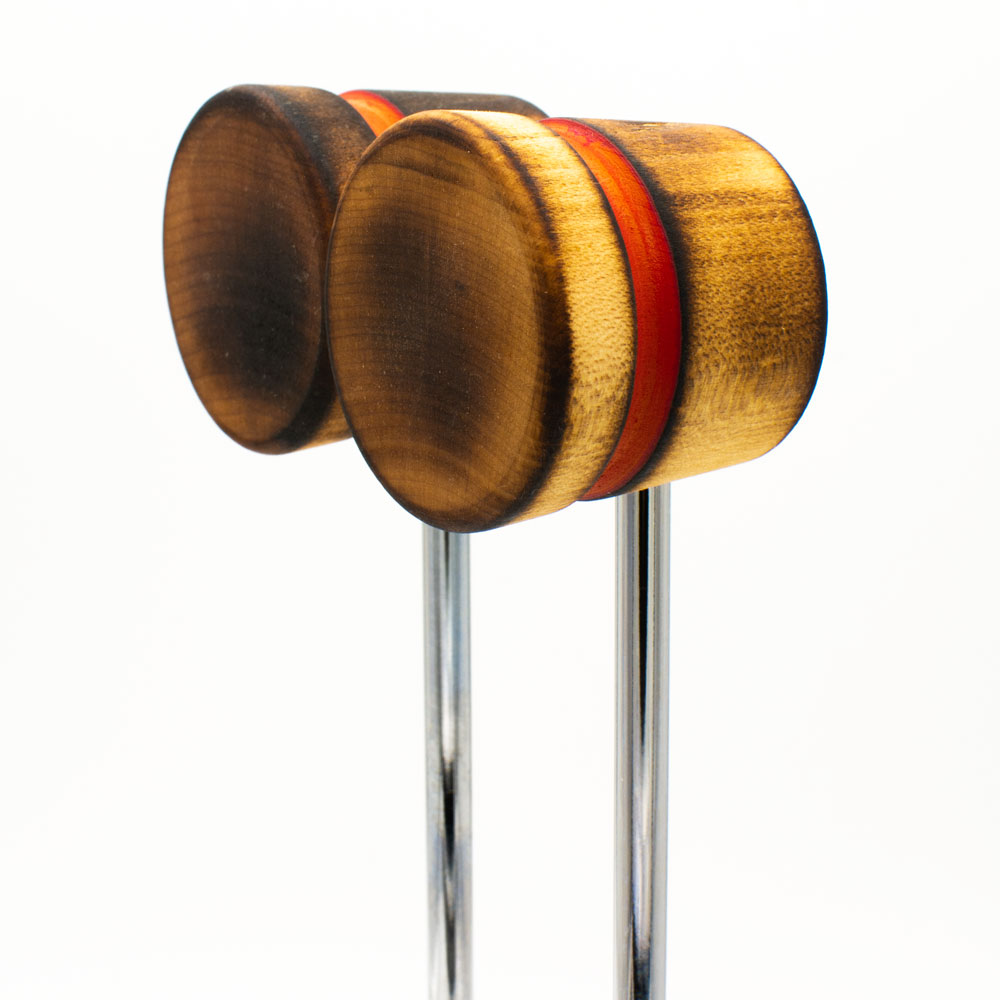 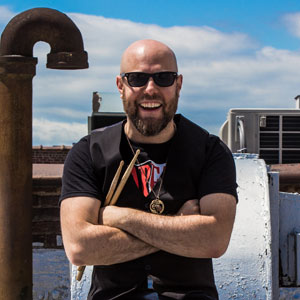 New York-based session drummer and writer Rob Mitzner has played on Billboard Top-10 charting albums, films, and Broadway shows, performing at Lincoln Center, The Smithsonian, Caesar’s Palace, The Blue Note, Boston Symphony Hall and for President Obama in his hometown of Washington D.C.  His book "Drumming in a Band: Stuff You Can Use" was released by Hudson Music in early 2022 and recently entered the top 100 best-selling percussion books on Amazon. Rob has also been featured in Downbeat magazine, Modern Drummer, Drumeo and Drum Talk TV and recorded on over 60 commercially available albums across many genres. When he’s not playing and touring, Rob spends his days at C-Room Studio in Brooklyn cutting drum tracks, shedding funky electric bass and writing articles. Rob holds a B.A. in Music and Political Science from Brown University, and is a proud endorser of Paiste Cymbals, Remo Drumheads, Hendrix Drums and Drumdots.