For more than a decade, NPR’s Tiny Desk Concerts has been an outlet for music fans to discover new artists and see stripped down versions of their favorite songs. The sessions were filmed at host Bob Boilen’s desk at the NPR offices in Washington D.C., but when the world went into lockdown due to the COVID-19 pandemic in March 2020, Boilen abandoned his own desk and began working from home.

Few people were asking “what’s going to happen to Tiny Desk?” in the spring of 2020, but it wasn’t long before music fans sought out the things that made them feel normal, which includes watching their favorite artists perform.

Paramore lead vocalist Hayley Williams stepped away from the band in 2020 to release her debut solo album, Petals for Armor. Of course, when she recorded the music, mostly in 2019, she had no idea that the opportunity to play the songs live would be hampered by a global pandemic.

Filmed in a house Williams previously lived at (in her old bedroom), she is joined in this Tiny Desk (home) concert by a band for the first time in months. With Low Boy artist Aaron Steele on drums, the group includes Joey Howard (bass), Becca Mancari (synth, vocals) and Julien Baker (guitar), who play three songs off of Petals for Armor. In this video, Aaron plays a Low Boy Lightweight Felt Daddy bass drum beater.

Aaron also played on the Petals for Armor album, and tells us that his experience with Williams helped him adjust to a new city.

“Even though I had moved to Nashville just before making Petals For Armor, I didn’t have a super strong friend circle in Nashville. But making that record and subsequently doing the Tiny Desk gave me some of my closest friends,” Aaron says. “I’m really grateful. Especially since I’m not your run-of-the-mill Nashville musician, and I thought I would get lost in that city. But thanks to Hayley, I found all my weirdos!!! I’m very thankful.”

The Mercury Café is a Denver institution. While diners enjoy organic meals in the bohemian- style ground floor restaurant, the sounds of live music and dancing feet are often pulsing through the ceiling above. When Nathaniel Rateliff moved to Denver in 1998, he frequented the Mercury’s second floor space, listening to jazz and dancing, and eventually playing his own music there.

Drummer Patrick Meese has been playing with Rateliff since 2008 and is no stranger to the venue’s raucous crowds. But when Patrick sat down behind his drums (complete with his Low Boy Felt Daddy bass drum beater) for this show, the hall was empty due to COVID restrictions. That didn’t seem to matter, as the band ripped though four tunes as if they were playing to a sold-out crowd.

Charlie Hall with The War On Drugs

The War On Drugs released their fifth album, I Don’t Live Here Anymore, on October 29. In this Tiny Desk (home) concert, the band gathered in their Burbank, CA studio to play four songs from the new release.

According to drummer and Low Boy artist Charlie Hall, this session served as a christening of sorts for the space.

“The place has been coming together for a little while, but it really took shape right then and there when we got all our gear set up. All of a sudden it felt like home. We chose to set up in a circle, to the chagrin of the camera crew, but it gave a feeling of togetherness and being at home,” says Charlie. “The decision to play a couple of the songs, in particular “I Don’t Live Here Anymore” and “Change” in a stripped down, different way lead to some really special moments and the songs found some new breath and I feel like ended up having a really special vibe.”

Pay attention to the amazing vintage tones Charlie pulls from his Ludwig Vistalite drum kit, which pairs nicely with a Ludwig Speed King pedal and his Low Boy Lightweight Felt Daddy bass drum beater. Charlie lays down a rock solid foundation that allows singer and guitarist Adam Granduciel, as well as the rest of the band, the freedom to weave unforgettable melody lines and soaring guitar solos throughout the session.

One easter egg present in many Tiny Desk (home) concerts are actual tiny desks. In the War On Drugs’ session, the desk descended from the ceiling and took on a starring role.

“We started joking about a literally tiny desk, and our keyboard tech Aaron really ran with it. He used drumsticks for legs, got a tiny lamp, the whole nine,” Charlies tells us. “He would periodically disappear, and it would be like ‘Where’s Aaron? Oh, he’s building his masterpiece.’ He set up this whole pulley system to raise and lower it with the capo on it and all that. That moment when he was carefully raising his Mona Lisa of craftsmanship back up and it came crashing down and just shattered into bits was just so perfect you couldn’t have planned it if you tried.”

Rashid Williams is one of the newest Low Boy artists. Rashid filmed this Tiny Desk (home) concert with Rick Ross before he was playing our beaters, but we wanted to include the performance in this article, anyway. The session was filmed in the gallery space of Miami artist Rich B Caliente, Ross’s longtime collaborator and friend. 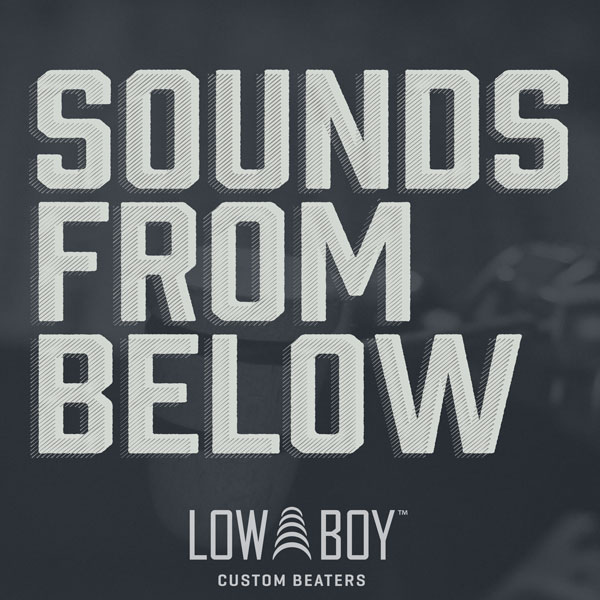